Kotug Seabulk Maritime’s tugs in Freeport, Grand Bahama were requested to urgently assist a container vessel that ran aground at the Freeport Anchorage.

At the time of the grounding, the vessel was under pilotage, and being towed dead-ship by four tugs from another company. The four tugs unsuccessfully attempted to re-float the vessel before calls were made out to KSM. RT Blackbeard, RT Raptor and SD Calypso were immediately dispatched to assist the tugs already on scene. Both Rotortugs® connected to the bow of the vessel, and the SD Calypso connected center lead aft. Three other tugs also pushed on the starboard quarter and another pulled via the center lead forward tow point.

It took around five minutes of pulling before the ship floated off the bottom and could be towed out into deeper waters. The Pilot then released the four tugs initially called out and requested the three KSM tugs take over the entire job. RT Raptor shifted to C/L forward, and RT Blackbeard remained alongside without a line connected. Finally, the vessel was brought safely into port later that night.
All maneuvers were completed safely and conducted with a high level of skill.
Chris Bhalai, Operations Manager of KSM: “Our team did a fantastic job! Something we train our people for, but you never know for sure how things work out until a real-life situation like this one occurs. I am truly proud of our crew! This was also a good opportunity to display the advantages of these highly sophisticated tugs. We’re happy we were able to assist and possibly prevented a greater catastrophe.” 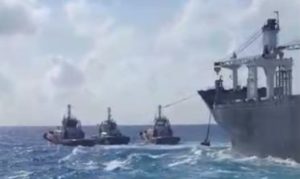 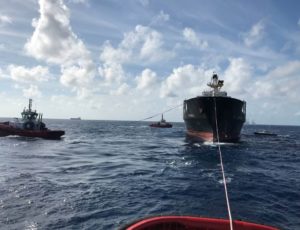 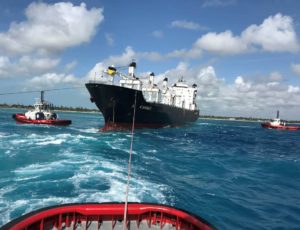 COVID-19: WE’RE IN THIS TOGETHER
Scroll to top